An excerpt from Murray Ellison’s Master of Arts Thesis © 2015 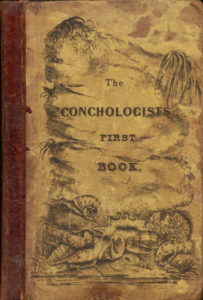 The Conchologist’s First Book was first published in April 1839, with its author being listed as Edgar Allan Poe. However, Poe was a consulting editor of the book and only wrote the Preface and Introduction. According to Poe documentarians Dwight Thomas and David Jackson, Poe credited much of the work to scientist Thomas Wyatt for “his late excellent Manual of Conchology.” The book was originally meant to be an accessible and inexpensive abridgment of Wyatt’s original textbook (259). The work was published under Poe’s name due to his popularity. It turned out to be the most popular book, in sales, printed under Poe’s name. The fact that Wyatt asked Poe to accept authorship demonstrates that at least one professional scientist identified Poe as a credible authority on science. Poe’s interest in seashells was likely inspired by his service in the United States Army along the coastline of Charleston, South Carolina.

In Poe’s Introduction to the book, he explains that the history of the study of mollusks (seashells) went back to the ancient Greeks, noting the descriptions of seashells by Pliny and Aristotle. He documents that there have been significant historical studies of seashells found on board numerous seafaring vessels, on remote South Sea Islands, in West Africa, Chili, and New Holland. He argues that “Few branches of Natural History… are of more adventitious importance” than Conchology (Poe’s Complete Works XIV 98). A notable feature of this book is that it was one of the first popular scientific books to include color pages, offering “illustrations of two hundred and fifteen shells, presenting a correct type of each genus” (95).

The first edition was so popular that the publishers printed a second one in the same year. The third version was published in 1845 under Wyatt’s name, but Poe’s initials were only retained in the Preface (Thomas and Jackson 608). Poe’s involvement in The Conchologists First Book demonstrates that he was interested in lending his name to a legitimate scientific work. However, it also shows that he was willing to accept author’s credit for a work that he did not write.

*An excerpt from Murray Ellison’s Master of Arts Thesis © 2015